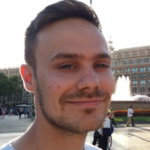 Thanks to all of the students for your questions! I'll write some longer answers, and maybe record a few podcasts, to answer the bigger questions in more detail. Keep an eye on https://samdparsons.blogspot.co.uk/